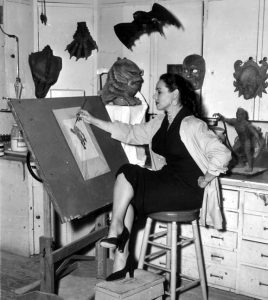 [pictured above: Milicent Patrick in her “monster factory”]

If you’ve not yet had a chance to view today’s Publishers Marketplace announcement (4/26), then you might have missed the news that JABberwocky has added and sold the first book by a debut non-fiction author!

A horror filmmaker and writer living in Los Angeles, Mallory O’Meara has long been fascinated with all things that go bump in the night. One of her film idols was a mysterious woman named Milicent Patrick, who was rumored to have designed the iconic monster from the classic 1954 movie The Creature from the Black Lagoon before having her career abruptly cut short. Despite Mallory’s captivation with Milicent Patrick and her famous creature, almost nothing else was known about Milicent’s life or other work in Hollywood. That is, until Mallory took it upon herself to research the incredible life and story of Milicent Patrick.

Scheduled for hardcover publication with Hanover Square Press in Winter 2019, Mallory O’Meara’s THE LADY FROM THE BLACK LAGOON will be the first book to connect the dots of the fascinating, albeit tragic, life of Milicent Patrick and to bring to light her previously unknown contributions to the Golden Age of Cinema.