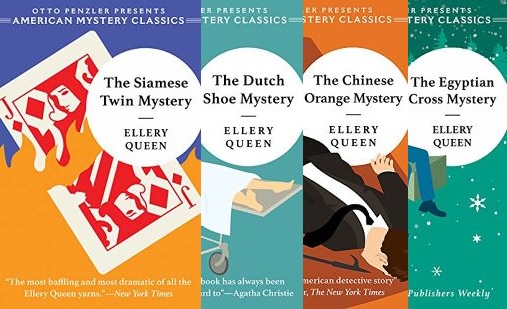 Not one, not two, but four (!) Ellery Queen mysteries reissued as part of the American Mystery Classics series by Penzler Publishers have received starred reviews in Publishers Weekly. Ellery Queen was on the inaugural list for this spiffy new line and has risen to the occasion, with every single Queen book so far earning a glowing, starred review, including the forthcoming reissue of The Egyptian Cross Mystery.

Publisher’s Weekly calls The Chinese Orange Mystery “one of the most bizarre puzzles in crime fiction…” In this unusual mystery, Queen and his friend Donald Kirk discover a dead body in Kirk’s office, in which all of the furniture has been rearranged to face backwards and two African spears have been inserted under the dead man’s coat. Publisher’s Weekly adds, “If this creates a new audience for a genre giant, Penzler, editor of the American Mystery Classics series, will have done yet another service for whodunit lovers.”

The Dutch Shoe Mystery follows Queen and his father as they solve the mystery of who murdered a millionairess before she went into surgery. Publishers Weekly calls it “[an] exceptional entry in the American Mystery Classics series…” and “a genuine treat for those who love to match wits with fictional detectives.”

Publishers Weekly praises The Siamese Twin Mystery, in which Queen and his father must solve a seemingly impossible murder as a forest fire approaches their location, as “expertly combining plot and setting to heighten suspense en route to the satisfying solution.”

The Egyptian Cross Mystery takes Queen to West Virginia to look into the murder of a schoolmaster, who was crucified and beheaded on Christmas morning. The case gets stranger when a millionaire rug importer is murdered in a similar fashion six months later. Of this title, Publishers Weekly says, “This brilliant fair play puzzle exemplifies the mission of the American Mystery Classics series.” The Egyptian Cross Mystery publishes November 3, 2020.

Originally published in the 1930s by Ellery Queen (the pseudonym for co-writers Frederic Dannay and Manfred B. Lee), the mystery series focuses on the eponymous Ellery Queen, a clever amateur sleuth who often helps his NYPD detective father solve crimes. The series has inspired films, a television series, radio plays, and more.

Penzler Publishers has selected these four Ellery Queen mysteries to be included in their American Mystery Classics, a line dedicated to reissuing classic American mystery fiction in new hardcover and paperback editions. Each book has been personally selected by Otto Penzler, whose more than forty years of experience as an editor, critic, publisher, and bookseller brings an unparalleled expertise to the line.