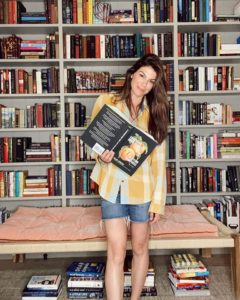 Set in the 1990’s, THE SOUTHERN BOOK CLUB follows a genteel book club that must do battle with a vampire that has invaded their small Southern town. It was chosen as the inaugural pick through a reader poll conducted by Genevieve Padalecki, who has 1.2 million followers on Instagram.

It’s only fitting that this ’90s-set horror novel continues to sire new readers, eager to sink their teeth into its pages, especially with the rave reviews that continue to come in. Audio File says, “[This] delightful rendition of the ensuing gore, crisp expletives, and eerie suspense of this horror story, which touches on themes of gender, class, and race, makes for an enthralling…experience.

Described as Steel Magnolias meets Dracula, THE SOUTHERN BOOK CLUB’S GUIDE TO SLAYING VAMPIRES is perfect for those who like their books to walk the line between comedy and horror. Hendrix’s book has appeared on multiple “highly anticipated” lists from outlets including the Huffington Post, the A.V. Club, and Popsugar.

Pick up your copy of this bestseller today!