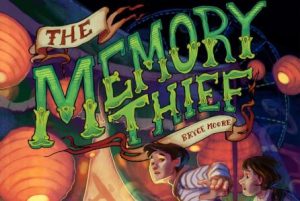 We have some great news on the film rights front, as Bryce Moore’s THE MEMORY THIEF is headed to development as a live-action/animated movie. The Stranger Things team at Shawn Levy’s Fox-based 21 Laps is working with Adaptive Books to adapt for Fox Animation.

From Variety: “21 Laps produced ‘Arrival,’ which was nominated for eight Academy Awards, and the Netflix series ‘Stranger Things,’ which won the top comedy series prizes at the Producers Guild and Screen Actors Guild awards. 21 Laps’ credits also include the ‘Night at the Museum’ franchise, ‘Fist Fight,’ ‘Why Him?’ and ‘Table 19.'”

THE MEMORY THIEF tells the story of twins Benji and Kelly, who meet a strange old man at their local county fair, who they learn can share—and erase—other people’s memories. Benji learns the the ability to manipulate memories himself, but this power comes at a cost to his family, and to his own mind.

We at JABberwocky are extremely excited to see what our publishing partners at Adaptive, and the teams at 21 Laps and Fox Animation, come up with for this fantastic book!