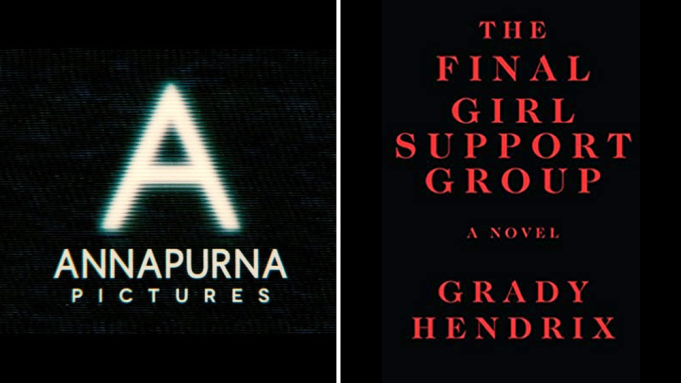 We could not be more excited to announce that Annapurna Pictures is adapting Grady Hendrix‘s latest horror masterpiece, THE FINAL GIRL SUPPORT GROUP, as a series!

Elizabeth Craft and Sarah Fain, co-creators of ABC’s The Fix, are set to write the adaption, with Grady serving as an Executive Producer. Elizabeth Craft and Sarah Fain have executive produced, created, and written for numerous television shows including Joss Whedon’s Angel, the Emmy and Peabody Award-winning show The Shield, Women’s Murder Club (which they created based on the James Patterson novels), The Vampire Diaries, and Lie To Me.

The women in the Final Girl Support Group have been in group therapy together for decades, each one having gone through a terrible ordeal: attacks by a cannibal family in Texas, by a machete wielding maniac at summer camp, by an older brother returning to settle scores on Halloween, by a lunatic who allegedly entered their dreams. The final girls are the middle-aged survivors of the real-life crimes that popular slasher movies are based on. Some of them are addicts, some are in denial, and some have become motivational speakers, but all of them remain haunted by their pasts.

Now someone is killing them, one by one, and the only survivor who sees a pattern is the most unstable final girl in the group. Even though the other women see her as someone to be pitied, her single-minded drive to survive makes her the only person who can stop the new murders.

Forthcoming in July 2021, THE FINAL GIRL SUPPORT GROUP is a story about what it means to survive. As Deadline puts it, “Both an homage to and subversion of iconic slasher films, The Final Girl Support Group is billed as a fresh new take on the beloved horror sub-genre, while also capturing the cultural zeitgeist around true crime stories.”

Congratulations on the amazing news, Grady!