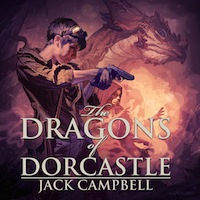 We’re pleased to announce that THE DRAGONS OF DORCASTLE, the first book in the Pillars of Reality epic fantasy series from New York Times bestselling author Jack Campbell, will be available in ebook format on April 3rd, 2015! In just a few short weeks, readers will be able to experience the masterful worldbuilding and fully-realized characters audiobook listeners have been raving about!

Book Lover’s Life gave it 5 stars, saying, “From the very first page I was drawn into a world filled with an almost steampunk feel but that’s heavy in magic too. It was an action packed and exciting book and one I can’t recommend highly enough. I loved everything about the book, from the magical world to the fantastic characters, and I can not wait for the next book to see what happens.”

The Pillars of Reality series is an Audible bestseller, and is one of the fastest-selling Audible Studios titles ever. Here’s a little bit more about the series:

For centuries, the two Great Guilds have controlled the world of Dematr. The Mechanics and the Mages have been bitter rivals, agreeing only on the need to keep the world they rule from changing. But now a Storm approaches, one that could sweep away everything that humans have built. Only one person has any chance of uniting enough of the world behind her to stop the Storm, but the Great Guilds and many others will stop at nothing to defeat her.

Update: You can purchase your copy today for your Kindle, Nook, Kobo, Google Play, and iOS e-reading devices and apps. But act fast — the $5.99 price won’t last long! If you’ve already finished THE DRAGONS OF DORCASTLE, the second book in the series, The Hidden Masters of Marandur, is currently available from Audible for your listening pleasure.