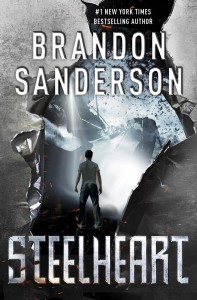 The announced first printing of 350,000 copies includes exclusive editions for Target, Walmart and Books a Million, each with their own Epic case files, and a Barnes & Noble exclusive with an annotated first chapter.   And Steelheart will be forthcoming in twelve translation markets, where it is also Sanderson’s fastest-selling book to date.

Since Brandon Sanderson is heretofore best-known for writing epic fantasy for adults, it’s especially satisfying that he’s hit the NY Times list with two YA titles in 2013 (THE RITHMATIST was on the charts earlier in the year), bringing his work to the attention of an entire new audience of younger readers and their families.  It also positions Brandon Sanderson for a powerhouse 2014, when we are scheduled to see: WORDS OF RADIANCE, the 2nd novel in the Stormlight Archive saga and Brandon’s first new epic fantasy in four years; a spectacular new trade paperback edition of The Way of Kings, the first Stormlight Archive novel; a new edition of Mistborn: The Final Empire tailored for the Young Adult audience; and Firefight, the sequel to STEELHEART.  It’s hard to climb higher than #1 on the bestseller lists, but if there’s a way to do it, Brandon Sanderson will show us next year.