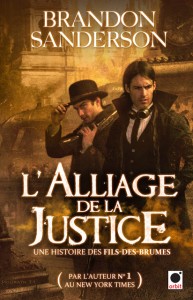 In case you missed the news yesterday, Le Festival des Mondes Imaginaires (or Festival of Imaginary Worlds) held in the City of Epinal announced the winners of their annual award for excellency in French fantasy: the Imaginales Prize.

Brandon Sanderson was JABberwocky’s only author represented across the multiple categories included in the Imaginales Prize, and we are excited to announce that he is the winner of the 2013 “Best Translated Fantasy Novel” Award for his novel THE ALLOY OF LAW!

2013 is off to a strong start for Brandon Sanderson and we are also eagerly waiting the announcement of this year’s Hugo Awards, as The Emperor’s Soul is a finalist in the “Best Novellas” category. All of us at JABberwocky couldn’t be more excited to see these fine works receive the critical acclaim that they deserve. Félicitations à Brandon!