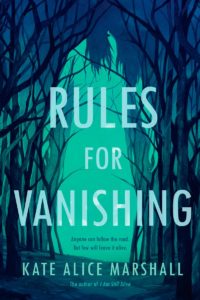 Film rights for Kate Alice Marshall’s RULES FOR VANISHING have been optioned by Rob Friedman (Ascendant Entertainment) and Patrick Wachsberger (Picture Perfect Federation)! Friedman and Wachsberger previously worked together on franchises like Twilight, The Hunger Games, and Divergent during their time as co-chairmen of Lionsgate Motion Picture Group. We’re thrilled that Marshall’s YA horror novel has captured their attention and that they’ll be bringing their considerable talents to the screen adaptation.

RULES FOR VANISHING was the #1 New Release in Amazon’s Teen & YA Ghost Stories category. Many outlets featured it on “best of” lists, including Barnes & Noble, Refinery 29, Bustle, Book Riot, and BookPage.

RULES FOR VANISHING follows 17-year-old Sara whose sister Becca disappeared one year ago and only Sara knows where she is. Becca went to find the ghost of Lucy Gallows and is trapped on the road that leads to her. When Sara and her friends meet in the forest to search for Becca, the mysterious road unfurls before them. All they have to do is walk down it.

But the path to Lucy is not of this world, and it has its own rules. Every mistake summons new horrors and no one is guaranteed safe passage. Sara knows that if she steps onto the road, she might not come back. But Becca needs her. And Lucy is waiting.

RULES FOR VANISHING, published in North America by Viking Children’s and in the UK by Walker Books, is Marshall’s second YA novel. Her first, I AM STILL ALIVE (also published by Viking Children’s), is currently being adapted into a feature film by Lori Evans Taylor with Universal and Pearl Street Films producing and Ben Affleck attached to star.