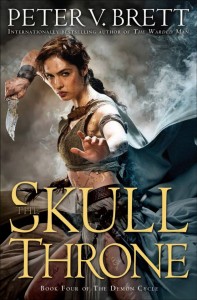 Demons couldn’t keep the fans away!

UPDATE (4/15/15) – Incredible news – THE SKULL THRONE has landed at #5 on the Sunday Times Bestseller list in the United Kingdom! That brings a total English language combined sales of over 25,000 copies in its first weeks on sale. Simply astounding. Congratulations Peter on all the hard work, it paid off!

It is our honor to announce that Peter V. Brett’s THE SKULL THRONE is a New York Times best seller! It landed at #14 on the print list, #13 on the ebook list, and #13 on the combined print/ebook list. Congratulations to Peter and his publisher, Del Rey!

This is a huge next step in Peter’s plan to dominate the bestseller list. He moved up several spots from his last time on the list and this is his first appearance on the printed list. We have to admit he looks pretty good there and we imagine he’ll be there again!

Peter is currently on tour promoting the book in the United Kingdom and you can check out his website to see where he’s scheduled to appear.

Fans and critics are already raving about THE SKULL THRONE! Faire’s Fair says “THE SKULL THRONE is exploding with action that will leave you breathless and wanting more!” While Book Frivolity says “Heart thumping, adrenalin pumping consequences. The crescendo is near perfect!…The last chapters were amazing.” Pick up your copy today and see why!