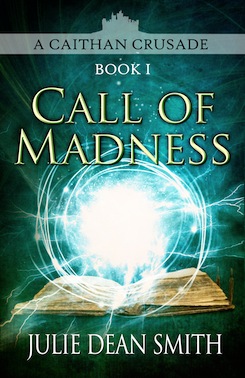 Dive into some epic fantasy with CALL OF MADNESS—it’s available as a free download through October 13th here:

Magic has been forbidden in Caithe for 200 years and those born with magic—the Lorngeld—are considered the devil’s children. The Lorngeld are ruthlessly executed by the Caithan Church before they can be corrupted by mind-plague—the volatile madness that afflicts untrained wizards. Only King Kelwyn, artificially gifted with borrowed magic, is exempt from punishment. His daughter may not be so lucky.

Impertinent and rebellious, Princess Athaya prefers to spend her time gambling and drinking rather than courting would-be suitors. Discovering that she is a natural-born wizard is an unwelcome surprise. But there are those who believe it is a gift, and that an adept of Athaya’s inherent ability may be an opportunity to finally lead the Lorngeld out of persecution.

Torn between loyalty to her kingdom, her duty to the Lorngeld, and her own impulsive heart, Athaya must harness her burgeoning magic before it drives her mad, and learn to wield its power before those who fear it—and those who envy it—can destroy her.