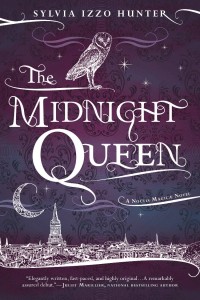 It’s been two weeks since Sylvia Izzo-Hunter’s debut novel THE MIDNIGHT QUEEN hit shelves, and the incredible reviews have been pouring in! Sylvia was even chosen for an author spotlight by Romantic Times, who called the book “creative and suspenseful — and never predictable…a novel that readers will be unable to put down.”

THE MIDNIGHT QUEEN, the first installment in the Noctis Magicae series, tells the story of Gray, a student at Oxford’s Merlin College, being educated in the lore of magick. But when he accompanies four fellow students on a mysterious midnight errand that ends in disaster and death, he is sent away in disgrace, to spend the summer at his professor’s country estate. There, along with the professor’s daughter Sophie, Gray discovers that there are secrets in their magic society and what Gray witnessed in Oxford might be even more sinister than it seemed.

Bookworm Blues has called THE MIDNIGHT QUEEN “a powerfully atmospheric novel…a love story that will warm your heart, and a story of magic and struggle, truth and might, in the face of all odds, with some stunning writing that will really hook readers and brings them into the colorful world that Hunter has created.”

Be sure to check out the rest of the reviews over at Sylvia’s author page!