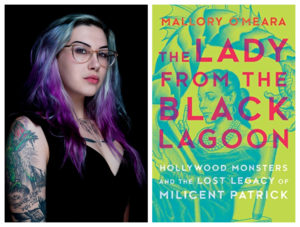 THE LADY FROM THE BLACK LAGOON uncovers the life and work of Milicent Patrick—one of Disney’s first female animators and the only woman in history to create one of Hollywood’s classic movie monsters.

Since its initial publication in 2019, THE LADY FROM THE BLACK LAGOON has won numerous awards including  the 2019 South California Independent Bookseller Association Book Award and the Rondo Hatton Classic Horror Award.  It was nominated for the 2019 Goodreads Choice Award in the History & Biography category and the 2020 Hugo Award for Best Related Work.

The New York Times offered high compliments saying, “O’Meara achieves her goal. Thanks to her persistent efforts, THE LADY FROM THE BLACK LAGOON pulls Milicent Patrick and her considerable accomplishments out of the murky swamp of overlooked history and back into the light.”

O’Meara’s book garnered positive reviews from the LA Times, which calls it “engaging and compelling”, along with the Seattle Times. A Publishers Weekly starred review calls the title, “a fascinating slice of Hollywood history with a feminist slant, correcting a sexist wrong from decades ago and restoring Patrick to her rightful place of esteem.” This compelling narrative nonfiction has also been in featured in articles on Entertainment Weekly and The Washington Post.