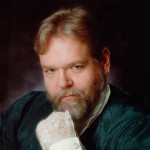 Congratulations to everyone who went home with a newly-minted Hugo Award this weekend following this year’s World Science Fiction convention in Spokane! Cixin Liu, Ken Liu, Thomas Olde Heuvelt, and Lia Belt were just a few of the honorees.

In addition to announcing the Hugo Award winners, we have also learned that WorldCon 2017 is going to be held August 9th – 13th in Helsinki, Finland with JABberwocky’s own Walter Jon Williams serving as a Guest of Honor! We are very proud of Walter’s esteemed selection but we can’t say we are entirely surprised.

Walter has written over thirty books and many, many more works of short fiction that span the genres of cyber-punk, space opera, thriller, and more. He is a multiple Hugo and Nebula Award nominee who twice won the Nebula Award,  first in 2000 for “Daddy’s World” [buy link]  and then again in 2004 for “The Green Leopard Plague” [buy link].

JABberwocky is very excited and happy for Walter’s selection as a WorldCon Guest of Honor, and we hope you will join him and us in Helsinki in 2017!