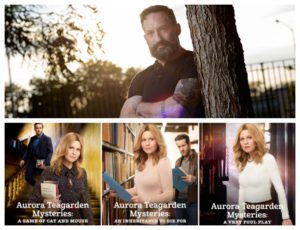 JABberwocky authors Myke Cole and Charlaine Harris are coming to the small screen in August.

Myke will be featured on Discovery Channel’s new series, Contact, in which a group of highly trained investigators strive to determine whether extraterrestrials have made contact on Earth.

Led by Myke, a former CIA targeting officer, and conflict analyst Dr. Michael Livingston, the series features six professionals looking to solve that mystery using a “radical, new and comprehensive approach by bringing together millions of data points, credible eye-witness accounts and declassified government reports.” Discovery says this is the “first ever global investigation to determine whether or not aliens have made contact here on Earth.”

Contact premieres Wednesday, August 7, at 10 p.m. on Discovery Channel and again on Tuesday, August 13, at 9 p.m. on Science Channel. The show also will be available on the Discovery GO app.

Hallmark Mysteries and Movies Channel will release 3 brand new Aurora Teagarden movies, based on the beloved mystery series by Charlaine Harris. The films–A Game of Cat and Mouse, An Inheritance to Die For, and A Very Foul Play–will premiere August 4th, 11th, and 18th respectively. These movies will be featured on SIGNATURE MYSTERY, the premiere Sunday night destination on television for thrilling mysteries.

JABberwocky has released eBook editions of  the first eight books in the Aurora Teagarden series. For info about the other books in the series, head to Charlaine’s page on our website.