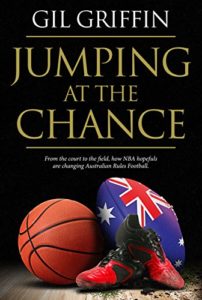 Sports fans, rejoice! We’re so excited to announce that our author Gil Griffin will be doing an interview on Sirius XM!

This Thursday, June 26th, at 6pm ET, Gil will be a featured guest on the show Aussie Football Rules America, hosted by Eddie McGuire on Sirius XM, the leading audio platform in the US. They’ll be talking about Gil’s book, JUMPING AT THE CHANCE, and the growing  American interest in playing and watching the Aussie Rules Football League. The show airs on SiriusXM’s Dan Patrick Radio channel (channel 211), and you can tune in online at SiriusXM.com or the Sirius XM app.

The AFL is one of the few big sports that has been able to resume its professional season following the COVID-19 crisis. So for those of you who have missed live sports in your life, this episode is not one to miss!

And as an added bonus, Jumping at the Chance is now available for only $2.99 on B&N, Kobo, Apple, Google Play, and Amazon for a limited time!

Gil Griffin‘s  book is the riveting account of how professional Australian Rules Football found an unlikely new source of talent: collegiate and professional level basketball players. He has also written for The San Diego Union-Tribune, The Albuquerque Tribune, and The Washington Post, and has covered the Australian Football League for a variety of Australian publications, websites, and television shows.