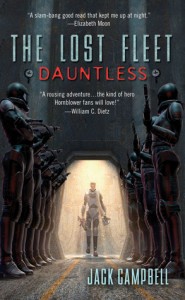 Available this week only, the first title in Jack Campbell’s New York Times bestselling Lost Fleet series, DAUNTLESS, can be purchased as an ebook for the low, low price of $1.99 via Amazon and Kobo. This military science-fiction novel is the first in a six-book series that has continued to grow in popularity among readers with each following installment. The Lost Fleet novels (published as mass-markets in the US) inspired such a devoted following that Penguin commissioned Jack Campbell to write not one, but two additional follow-up series in hardcover known as The Lost Stars and Beyond the Frontier, and have sold over one million copies world wide.

There are now ten novels set in the Lost Fleet universe (with the eleventh due out next month) so now is the perfect time to discover what many readers have already learned about Jack Campbell. If you’re a fan of galaxy-spanning, military science-fiction, do yourself a favor and pick up an ebook copy of The Lost Fleet: DAUNTLESS while it is only $1.99 this week!