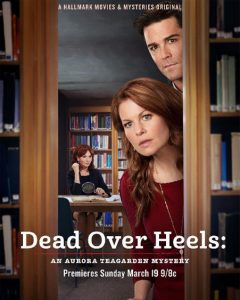 Mark your calendars! On Sunday, March 19th, DEAD OVER HEELS will be making its premiere on the Hallmark Movies and Mysteries Channel! The fifth installment of the Aurora Teagarden series, and based on the book of the same title, DEAD OVER HEELS continues the (mis)adventures of small town librarian and real crime buff Aurora “Roe” Teagarden.

When the body of Roe’s nemesis, Detective Sergeant Jack Burns, falls from the sky to land in Roe’s back yard, she once more finds herself involved in a mysterious death. It isn’t long before she realizes that strange things are happening to those around her, including anonymous “gifts” appearing at her home. Suspecting that everything is somehow related, Roe has to dig up answers before someone else winds up dead.

Starring Candace Cameron Bure of Full House fame, DEAD OVER HEELS is sure to be as fun and exciting as the previous movies in the Aurora Teagarden series. Be sure to check out the preview for a taste! And as an extra spot of fun, the ebook edition of DEAD OVER HEELS is on sale tomorrow through the 20th for just $2.99 at all major e-tailers! Plenty of time to catch up with the series if you need to, or spend time again with an old favorite.

Find it at Amazon, B&N, Kobo, iBooks, and Google Play.