Congratulations are in order for Daniel José Older, as his Shadowshaper just won the International Latino Book Award for Best YA novel (link)! The awards ceremony took place at California State University—Dominguez Hills on September 8th. 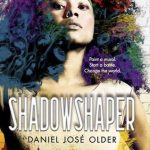 Poet Laureate Jacqueline Woodson (Brown Girl Dreaming, Another Brooklyn) in the New York Times, and even more excited to see her give a shout out to our very own Daniel José Older! In answer to a question about which contemporary writers Woodson most admires, she said, “D. J. Older is both a novelist and a journalist, and he’s pretty much telling the story of what it means to be of color in the 21st century.” Daniel is in good company as one of Woodson’s favorites — she also tipped her hat to Toni Morrison, James Baldwin, Edwidge Danticat, Brit Bennett, and Marcus Gardley.

To see what Jacqueline Woodson loves, pick up your own copy of Daniel José Older’s Shadowshaper.