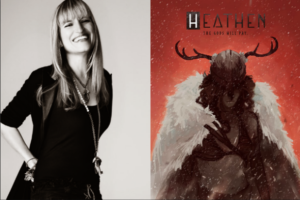 Kerry Williamson has also signed on to write for the film. Williamson previously penned the Tyler Perry-starring “Alex Cross” and most recently, Netflix’s “What Happened to Monday.” She is currently working on an adaptation of the fantasy series Sandman Slim for director Chad Stahelski and Studio 8.

Written and drawn by Natasha Alterici, HEATHEN centers on Aydis, a young female Viking, a warrior, an outcast, and a self-proclaimed “heathen.” Born into a time of warfare, suffering, and subjugation of women, she is on a mission to end the oppressive reign of the God-king Odin.

The comic’s first trade paperback sold out in one week and immediately returned for a second printing. The book was selected by Young Adult Library Service Association (YALSA) to be included in its 2018 “Great Graphic Novels For Teens” list and has sold overseas in Spain and Italy.

Earlier this year we shared the news that VAGRANT QUEEN will be adapted into a live-action series on SYFY. With SYFY’s VAGRANT QUEEN series slated for release in 2020 and a film for HEATHEN in the works, JABberwocky couldn’t be more excited to be working with such incredible titles.