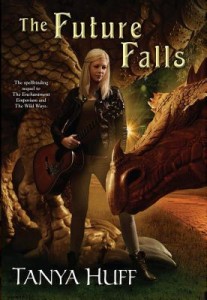 Tanya Huff‘s latest Enchantment Emporium novel, THE FUTURE FALLS, has been nominated for the 2015 Aurora Award for Best Novel! The Aurora Awards are the top award for Fantasy and Science Fiction in Canada.

THE FUTURE FALLS, the third Enchantment Emporium novel, was released in 2014 to glowing reviews, including one from Publishers Weekly, which called it “an enchanting example of contemporary fantasy.” The first book in the series, ENCHANTMENT EMPORIUM, was named one of the 10 Best SFF novels of 2009 by Booklist.

Tanya’s standalone novel, THE SILVERED, won the Aurora Award in 2013 and her third Tony Kerr “Smoke” novel, was a finalist for the award in 2007.

We would also like to share several award nominations for two of the Tachyon titles for which we handle foreign rights. WE ARE ALL COMPLETELY FINE by Daryl Gregory and YESTERDAY’S KIN by Nancy Kress are both finalists for the Locus Award for Best Novella and the Theodore Sturgeon Memorial Award! Gregory has also been nominated for the Nebula Award for Best Novella.

It has been a great year for JABberwocky and Tachyon titles!  We hope to have more good news when the winners of these awards are announced in June!