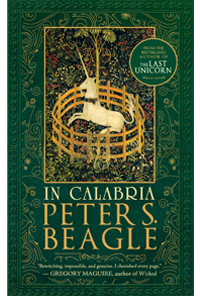 JABberwocky is pleased to announce that Peter Beagle’s IN CALABRIA has been named a “Best Novella” finalist for the 2018 World Fantasy Awards! Published by Tachyon Publications in February of last year, Peter’s novella received lots critical acclaim:

JABberwocky represents the foreign and audio rights to IN CALABRIA, and the novella has already been translated into German, Czech, Polish, and Romanian with more to come. The winners of this year’s World Fantasy Award will be announced on November 4th during the World Fantasy Convention, and JABberwocky will be crossing its fingers until then.