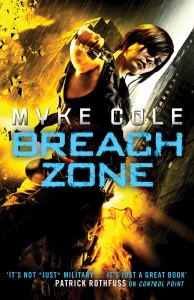 15 begins, we’d like to reflect on the past year, which was a fantastic one for our clients! Myke Cole has once again received superb recognition across the board. BREACH ZONE, the third and final installment in his Shadow Ops series, was picked as a top book of the year by the Qwillery, Only the Best Sci Fi & Fantasy, and Pat’s Fantasy Hotlist, among others. His upcoming novel GEMINI CELL, the first book in his brand new Operator series, has already been recognized as well: Buzzfeed and Kirkus have both listed it on their top picks for the new year!

F, have both also been listed on io9.com‘s list of “Mind-Blowing Science Fiction and Fantasy Books to Look Out for in 2015.”

WORDS OF RADIANCE, the second book in Brandon Sanderson’s Stormlight Archive series, was a finalist in the Goodreads Books of the Year Awards. It was also picked for year’s best lists by Amazon, Fantasy Literature, Swide Magazine, BookLoons, Bibliosanctum, and the Arched Doorway, which also included SHATTERING THE LEY, by Joshua Palmatier. Swide Magazine also included John Sprunk’s BLOOD AND IRON and Charlaine Harris’s MIDNIGHT CROSSROAD on their best of 2014 list.

Marie Brennan’s TROPIC OF SERPENTS was recognized by NPR and Amazon, Bibliosanctum, among others, as a top book of the year, and Erin Lindsey’s THE BLOODBOUND was chosen by Bibliosanctum, Black Gate, and Night Owl Reviews.

It has been a great year for JABberwocky authors, and 2015 is already looking to be another successful year!