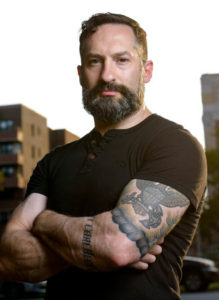 We’re thrilled to share that Myke Cole’s newest work of nonfiction, THE BRONZE LIE: SHATTERING THE MYTH OF THE SPARTAN WARRIOR SUPREMACY, has been sold to Osprey!

Myke’s first nonfiction title, LEGION VERSUS PHALANX, was described as “highly entertaining” (The Armourer) and “the most accessible introduction to ancient warfare that I’ve ever read” (Adventures in Historyland). David Frum, a speechwriter for President George W. Bush, tweeted, “We all know who wins, but what a great explanation of WHY.”

THE BRONZE LIE will explore the legend of the Spartan warriors and how their reputation as the greatest fighters in history is largely undeserved. With a background in history and several series under his belt, Myke is the perfect messenger to set the record straight.

Myke’s announcement tweet for this book went viral. After 20 hours, it had 230,000 views, was liked 3,000 times, and had multiple influencer engagements, including Malcolm Nance, Stonekettle, and John Scalzi.

This is Myke’s most successful book announcement to date and we’re excited for the future of this title.